Roan, my younger grandson, starts at Penrice Academy in September and will be able to come to me at Boscarne Crescent on his own from there so I did my last ever ‘school run’ this week. Ever since Finn, Roan’s 17 year old brother, started Nursery in the term before his fourth birthday I have collected at least one grandson from Sandy Hill on a Tuesday. Realising it was the last time made me a bit sad and very conscious of how quickly time passes and life moves on so Roan tried to cheer me up by telling me to have a good look around the playground so that I don’t forget!!!!!

As well as that ‘last time’ walk this week, I have done ‘first time’ walkies when looking after a dog for friends while they visited their six month old granddaughter after an operation so that she will be able to walk properly as she grows up. This made me realise that we should never take the ability to walk for granted and also that we should walk more – even when we don’t have to do school runs or walkies.

Some of my best memories are of walks that didn’t have a specific purpose or even a destination. They were with my Dad when I was growing up and were always circular because he had a rule that we never came back the way we went – because we lived at a crossroads this wasn’t a problem. This meant that we never arrived anywhere; instead, we went ‘via’ places as we continued the journey until we were home – a bit like life really.

Two nuns were walking through a Transylvanian forest for the first time when the road was blocked by a fearsome looking vampire and they feared that it might also be their last time.
“What do we do now?” asked a terrified Sister Agnes.
“I’ll pray while you show him your Cross,” said Sister Magdalene calmly.
So Sister Agnes raised herself to her full height, wagged her finger and shouted:

“Get out of our way, you stupid vampire.”

Love to you all,

wherever you are and whatever you’re doing. 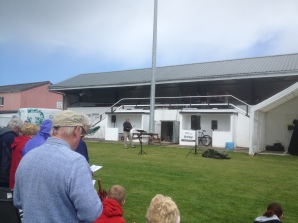 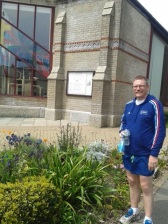 May 2014, Rev Mark Dunn-Wilson on his marathon Madness, raising funds for an orphanage in Mozambique

Easter 2014, Good Friday at the Cross

Rev Margery Stanlake on her zipwire challenge for Project 49